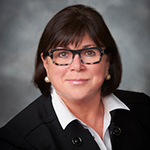 Ethel J. Taylor joined Echelon’s Board of Directors on May 31, 2019. Ethel is currently a member of the Audit and Risk and Conduct Review Committees and Chair of CAA Club Group’s Board of Directors. Ethel has over 30 years of experience in retail management and leadership development. Ethel began her career with Sears Canada, holding various positions, including her appointment in 1984 as Canada’s first female department store manager. After progressive management roles, she was appointed Senior Vice President and Officer of Sears Canada.

Ethel later joined Black’s Photography as CEO. During her tenure as CEO for Black’s, she led the management group in the sale of the company to TELUS in September 2009. Ethel retired from Black’s in 2013.

A graduate of Ryerson University, Ethel, her husband and son reside in the Toronto area. She is a past director of the Ontario Chamber of Commerce and Retail Council of Canada. In 2004-2005 and 2007-2008, Ethel was recognized as one of Canada’s Top 100 Women.

She is a past director of the Trillium Health Foundation and is the Chair of the Board of Espera Cooper NA.